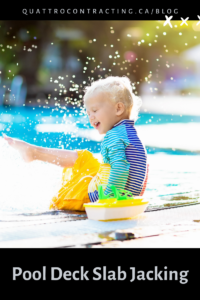 Quattro can help to reduce the risk of damage to your deck and pool by slab jacking and filling voids in the soil beneath the concrete before it settles and cracks.

What Is A Void In The Soil?

Over time, the ground under your pool deck will settle on its own. You may not be able to see it, but eventually, this settlement can lead to unsightly cracks, uneven joints in your expensive pool deck, or could also start to pull apart the coping around the pool edge.

How Do You Raise A Sinking Concrete Slab?

This preventative measure is far less expensive than it would be to replace a cracked slab.

Some of our competitors use a process that involves pumping a mixture of sand, cement, fly ash, and other additives beneath your slab. We use a more modern technique using a product called polyurethane foam.

Using a diamond-tipped core drill we make holes through the slab, we pump the foam through the drill holes until the slab starts to raise. Once the slab is level, we plug the holes with concrete.

When Is A Good Time To Fill The Voids?

There is no straightforward answer to this question.

Depending on how well your pool and concrete deck were built along with factors such as grading around the pool, nearby retaining walls, and so on, you could be at risk of your deck starting to settle within the first few years after being built.

In many instances, you just can’t tell if your deck is at risk of settling by looking at it.

How Does Soil Stabilization Prevent The Need For Slab Jacking?

We inject polyurethane foam deeper into the ground below and near your pool deck to strengthen the earth and prevent it from settling altogether. This is especially important in areas near existing retaining walls, slopes, and other locations where the ground is more likely to settle.

Repairing sunken concrete pool decks is not simply a cosmetic issue. Sunken slabs can cause problems including the devaluation of property value or delays with selling your home.

Contact us today for a free quote on your sinking concrete pool deck and let’s talk about slab jacking or soil stabilization options.