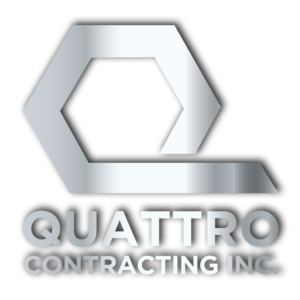 Quattro Contracting Inc. are experts in concrete repair. We work in areas across Southern Ontario. Our specializations include Polyurethane Injection for Slab Raising, Soil Stabilization and Water Leak Sealing. When you work with us you are working with experienced construction professionals with the expertise to provide top quality service to homeowners, construction companies, and institutional and industrial clients. Feel free to give us a call or click one of the links below to learn more about how our services can help get your home in tip-top shape.

Let's Talk About Your Project 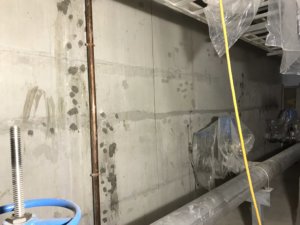 During the testing process of a liquid retaining concrete tank, visible leaks through cracks on the dry side of the walls are repaired by means of injecting polyurethane resin.  As seen in this video, holes are drilled on either side of the crack to at least the mid-depth of the… 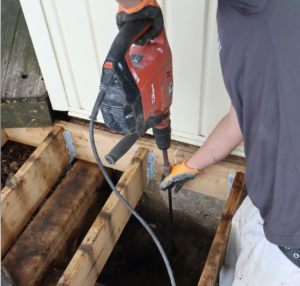 We received a call from a homeowner in cottage country that had part of their home foundation along the lake waterfront settle due to poor ground conditions below the foundation wall.  Our team went out and injected our expanding polyurethane foam BELOW the wall footings in order to stabilize the… 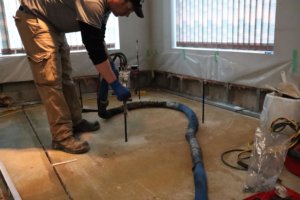 A transportation company contacted us with a serious problem where an entire corner of their head office building had settled.  Apparently, during the construction of the building years back, the builder had constructed this corner on poor soil. Our client had hired a pile contractor to dig around the outside… 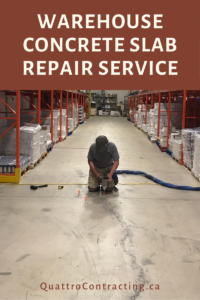 Our concrete slab repair services are quick and convenient. We work outside your busy hours to ensure minimal interruptions.

We had a pretty significant dip on our walkway that presented a tripping hazard so we had Quattro come and level out the cement. What an amazing job! Paul was prompt, courteous and extremely knowledgeable. Our walkway is as good as new and I don't have to worry about anyone tripping anymore! We are very happy with the work and highly recommend their services.

Quattro Contracting recently raised two concrete slabs for us. We found their service to be prompt and friendly. They fully explained what they were going to do, arrived on time and stuck to the original estimate. We were very pleased with their work.

Just thought I'd share that we had our basement sealed and waterproofed by Quattro Contracting Inc. located here in Erin and they were awesome. Very professional, very friendly, pricing was more than fair and they took a lot of pride in their work. If you have issues with water coming into your house I would highly recommend reaching out to them.

Over the last few years, our front steps had been gradually sinking and tipping forward which was pulling the porch railings out of position. We had been putting off repairing this because we assumed that the repair would include demolishing the front step with a jackhammer, concrete forms, and a cement truck to pour the concrete, then repairing the brick driveway, and installing new porch railings. By good luck, I found Quattro Contracting’s website and contacted Paul to see if our situation would be one that he would take on. Luckily it was and he arrived to do the job exactly when he said he would. Two holes were drilled through the step and material was pumped underneath the step which raised it up. Paul skillfully put in exactly enough to raise the step to the original position. When the job was complete the original porch railings fit exactly into place, the driveway bricks were not disturbed and there was no mess or clutter. What more can anyone ask? We would definitely recommend Quattro Contracting in any similar situation.

"Very responsive, good quality work, good value for money. They lifted a sagging corner of my concrete patio so that water drains again away from the house. Thanks, Paul!"